Joshua Kissi and Travis Gumbs are the owners StreetEtiquette.com, the style blog that’s making major waves in New York City and throughout the world. They offer an urban perspective on menswear and style in general, something that’s earned them a loyal fan base worldwide. With appearances in magazines from GQ to Complex, the 20-year-olds from the Bronx are excited about their current roles as StreetEtiquette.com founders, but are also looking ahead to the future and increasing opportunities. Being ranked as ‘Best Men’s Style Blog’ by the Guardian UK is just one of the distinctions the two-year-old blog has earned. Submerged in the events of college, as well as part-time nettlesome work, doesn’t stop Kissi and Gumbs from bringing forth their passion to the world. Enter here to win a pair of the Nexus Project shoes: Sebago Nexus Contest
Posted by Sebago Shoes at 11:43 AM No comments: 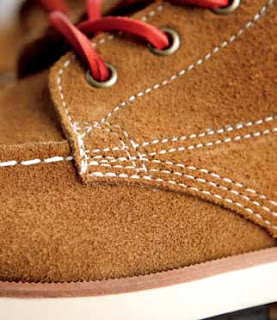 On the heels of the extraordinary response to our iconic design partnerships with Colette in Paris and Vane in New York, Sebago is proud to unveil our 1946 Collection of Limited Edition footwear.

A limited edition collection of key styles released quarterly to our premier retailers, offering exclusive products with a twist. Our November collection features an archival pattern from Sebago’s history, the Fairhaven, but newly-revitalized and brought to new heights in an eight-eye boot and Chukka. Countdown begins September 16, 2010. 46...45...44...
Posted by Sebago Shoes at 7:21 AM No comments:


Born in Manhattan, Jake Davis is a graduate of NYU’s Tisch School of the Arts and a nominated MTV student visionary filmmaker. While still in film school, Davis was recruited by the advertising agency Wieden+Kennedy to direct a short film for Nike® Davis continued to create slice-of-life grassroots promos and industrials for Nike, as well as long-form concert videos, tour visuals, and EPK’s for Fat Beats, Sony® Columbia® and a host of other record labels. Davis has worked with a “who’s who” of the music industry, creating music videos, live performances, and documentaries for such artists as My Chemical Romance, Flyleaf, Kanye West, 50 Cent, Nelly, T.I., Snoop Dogg, Korn, OneRepublic, Hinder, Hawthorne Heights, Head Automatica, Staind, Lacuna Coil, and KT Tunstall. He is a constant collaborator with international skate/streetwear brand Supreme® and is developing the feature film script “Coolhunter,” which is inspired by his work with Nike. Enter here to win a pair of the Nexus Project shoes: Sebago Nexus Contest
Posted by Sebago Shoes at 9:02 AM No comments: